Prostate cancer: the most common cancer among men in England - 2010 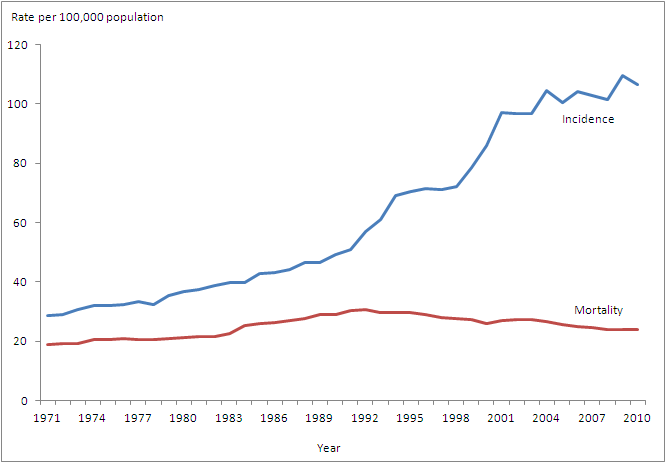 Prostate cancer is the most common male cancer in England, accounting for a quarter (26%) of all newly diagnosed cases of cancer among men in 2010. Just under 34,900 new cases of prostate cancer were diagnosed in 2010, a rate of 106 new cases per 100,000 men. It is estimated that one in eight men will develop prostate cancer at some point in their lives (Cancer Research UK, 2012a).
In 2010, just under 9,100 males died from prostate cancer in England, a rate of 24 deaths per 100,000 males. Prostate cancer was the second most common cause of cancer death in men in 2010, after lung cancer, accounting for 13% of all male cancer deaths. Mortality rates increased steadily between 1971 and 1992, before declining gradually between 1992 and 2010.
The sharp rise in the incidence of prostate cancer in the early part of the 1990s reflects improvements in diagnosis from increased use of Prostate-Specific Antigen (PSA) testing (Quinn et al, 2001). This has been key in the large improvements in survival over recent years. For men diagnosed with prostate cancer in 2006-2010 and followed up to 2011, the five year survival estimate was 80%, compared with 75% for men diagnosed between 1999 and 2003 and followed up to 2004 (see Background Note 1). The introduction of the PSA test increased the diagnosis of latent tumours that would not otherwise have been diagnosed during a man’s lifetime. Latent tumours are generally those which do not progress far enough to cause problems or symptoms or become life-threatening. Men with these tumours have higher survival (Office for National Statistics, 2012a).
Whereas survival of most cancers is generally higher among younger patients than older ones, for prostate cancer the reverse is true: survival is slightly lower for men aged 15–49 years (90 per cent) than for those aged 50–69 years (92 per cent) (Office for National Statistics, 2012b). Higher survival among men aged 50-69 is likely to be due to PSA testing in this age group (Cancer Research UK, 2012b). The strongest risk factor for prostate cancer is age (Cancer Research UK, 2009): it is relatively uncommon in men under 45 but becomes more common with advancing age. In 2010, 75% of new cases occurred in men aged 65 and over, and the largest number of new cases was among those aged 70-74.
There is currently no national screening programme for prostate cancer. However, the Prostate Cancer Risk Management programme was introduced in 2002 in response to considerable demand for the PSA test among men worried about prostate cancer. The programme provides information to men on the risks and benefits of the PSA test, to enable them to decide whether or not to have the PSA test. The test is available free of charge to those men aged over 50 who choose to have it (NHS Cancer Screening Programmes, 2012).