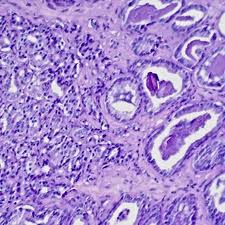 There is wide coverage of new research that argues that routine screening could reduce deaths from prostate cancer, with BBC News, The Daily Telegraph and the Daily Mail all reporting the story. This controversial study is likely to reignite the debate about whether routine screening for prostate cancer does more harm than good.
The large long-term study involved prostate-specific antigen (PSA) blood tests on a group of men aged between 30 and 55. PSA tests can be used to help doctors diagnose prostate cancer, which raises the level of PSA in the blood. The men were followed-up over a period of 20 to 25 years to see if they developed or died from advanced prostate cancer.
The study aimed to see if researchers could identify a PSA cut-off level for different age groups. If men had PSA levels above the cut-off, this would indicate a 'red flag' for developing advanced prostate cancer, and would warrant long-term follow-up and re-testing.
Researchers found small high-risk subgroups with the highest PSA levels had a moderately significant higher risk of developing or dying from advanced prostate cancer. They found that most men in the study who developed or died from advanced prostate cancer during follow-up tended to have the highest PSA levels in their 40s and 50s.
From this, they concluded that potentially incurable prostate cancers could be detected by careful surveillance of small subgroups of men with the highest PSA levels, while longer re-testing intervals could be considered for those with lower levels.
However, this was not a study designed to evaluate whether or not population-wide screening using the PSA test should be offered. A more reliable test than the PSA test alone is needed before routine prostate cancer screening can be introduced.

Where did the story come from?
The study was carried out by researchers from Memorial Sloan-Kettering Cancer Centre in New York and other institutions in the US, Sweden and the UK. Funding was provided by various sources, including the National Cancer Institute and the Swedish Cancer Society.
It was published in the peer-reviewed British Medical Journal.
Overall, the news coverage accurately reflects the results, with the BBC, The Daily Telegraph and the Daily Mail all pointing out that the issue of routine screening for prostate cancer remains controversial.
Any evaluation of screening programmes for prostate cancer would need in-depth consideration of the full body of research as well as the risks and benefits of such a programme.
The BBC quotes Dr Anne Mackie, director of NHS screening programmes at Public Health England, who says that the organisation is considering the results of the study and that, "We are currently in the process of a scheduled review for a screening programme for prostate cancer and will make a recommendation towards the end of 2013".

What kind of research was this?
This was a nested case-control study. It aimed to see whether there is a link between the level of prostate-specific antigen (PSA) measured in the blood of men aged 40-55, and their subsequent risk of developing advanced prostate cancer or dying from prostate cancer.
PSA is a protein produced by the male prostate gland. PSA levels are usually raised in men with prostate cancer and, when considered alongside other signs or symptoms on examination, a raised PSA level may indicate that a man could have prostate cancer.
PSA levels are also usually monitored in people who have diagnosed prostate cancer to see how they are responding to treatment.
However, prostate cancer screening looking at PSA level alone is not currently done in the UK as it is often not a very reliable indicator of prostate cancer. PSA levels can be raised by many other non-cancerous conditions, including benign enlargement of the prostate gland (which is common with increasing age), inflammation of the prostate, or a urine infection. It has been very difficult to find an accurate cut-off PSA level that could reliably indicate whether a man has prostate cancer or not.
Overall, considering PSA as a routine screening test for prostate cancer would need to involve many important considerations. It could also lead to potential risks, including:

The current study aimed to look at some new evidence about whether there is a particular screening approach, where the benefits of screening outweigh the risks.

What did the research involve?
The researchers used members of the Malmö Preventive Project, an ongoing cohort study that began in 1974.
This study included a subset taken from the cohort study of 21,277 Swedish men from the general population who had a single blood test between 1974 and 1984, when they were between the ages of 27 and 52. The blood sample was then frozen and stored.
About six years later, subsets of men from particular age brackets were asked to give a second blood sample. A total of 4,922 men gave these second blood samples (72% of those who had been invited).
The researchers then linked these men's records to the cancer registry at the National Board of Health and Welfare in Sweden to identify men diagnosed with prostate cancer up to the end of 2006. They reviewed medical records to identify any prostate cancers that were metastatic, where the cancer was advanced and had spread to other parts of the body. The researchers also reviewed death certificates from those who had died to identify the cause of death.
The researchers then measured concentrations of PSA in the blood samples frozen more than 20 years previously. This is a method which researchers say has been shown to be compatible with measuring PSA in freshly obtained blood.
They focused their research questions around the men's age at the time the blood samples were taken to see at what age PSA testing could reduce the risk of advanced prostate cancer or death from prostate cancer. The age groups they focused on tested PSA at:

For their analyses, the researchers used a nested case-control study design within the cohort. This means that for each man with metastatic prostate cancer or who had died from prostate cancer (the cases), they randomly selected three controls who were alive and free from either of these outcomes during the same time period. The PSA tests between the control and the cases were then compared.

Around age 40
At around age 40 (37.5 to 42.5 years) the researchers found that, even for men with PSA in the highest 10th of values for this age group (above 1.3 micrograms per litre), their risk of having metastatic prostate cancer during follow-up (about 15 years) was very low at around 0.6%. They concluded that this would make it difficult to justify PSA screening for all men around the age of 40.

Mid to late 40s
When looking at the men in the next age bracket (45 to 49 years), the researchers found that for men with PSA levels in the highest 10th of PSA levels (above 1.6 micrograms per litre) now had a 1.6% risk of developing metastatic prostate cancer during 15 years of follow-up. Although a higher figure, an incidence rate of 1.6% (around one in 63) would still be hard to justify routine PSA screening.

Early to mid 50s
When looking at men who had PSA levels in the highest 10th at age 51-55 (above 2.4 micrograms per litre), there was a 5.2% risk of developing metastatic prostate cancer during follow-up.
From this, the researchers argued that not starting prostate cancer screening until the early to mid 50s "would leave an important proportion of men at a considerably increased risk of later being diagnosed with an incurable cancer".

Re-testing interval
The researchers' next step was to consider what the appropriate re-testing interval would be. They found that with a low cut-off PSA level below 1.0 micrograms per litre, the risk of metastatic cancer is no higher than 0.4% in any group. So, for men below this level, a re-testing interval of "less than five years would be unnecessary".
Looking at deaths, 44% of men who died within 25-30 years had concentrations in the highest 10th at ages 45-49, and 44% had concentrations in the highest 10th at ages 51-55. The researchers considered that, "This suggests that close to half of all prostate cancers destined to lead to death would be detected early by careful surveillance of a small high-risk subgroup."

How did the researchers interpret the results?
Overall, the researchers conclude that PSA concentration can be used to predict long-term risk of metastatic prostate cancer or death from prostate cancer, and "can identify a small group of men at greatly increased risk compared with a much larger group highly unlikely to develop advanced cancer if [further] screening is delayed for seven or eight years".
They say that, "Given existing data on the risk of death by PSA concentration at age 60, these results suggest that three lifetime PSA tests (mid to late 40s, early 50s, and 60) are probably sufficient for at least half of men."

Conclusion
Overall this is well-conducted research, but screening is a complex issue for consideration.
In the UK there is currently no general population PSA level prostate cancer screening programme. PSA level alone is often not a very reliable indicator of prostate cancer and could lead to further unnecessary and invasive diagnostic tests and treatments.
The current study tried to find out whether a more targeted approach, using different PSA cut-off levels for different age groups and different re-screening intervals according to level, would be more effective.
However, overall the results were not very conclusive, and this research did not intend to offer guidance as to whether and how screening should or should not be offered.
The current study is likely to be added to the breadth of research informing the issue of prostate cancer screening. It is not possible to conclude from this research whether or not men of a certain age should be screened. It is also not possible to say whether PSA testing might one day be considered as a prostate cancer screening test in the UK.
Currently in the UK, doctors perform PSA testing on an individual basis, taking the results into account alongside a man's symptoms, signs on examination, and other test results to aid in the diagnosis and monitoring of prostate cancer.