The 'Botox for hair' that could save women from going bald: Fish protein found in diet of Greenland's Inuits reduces thinning hair 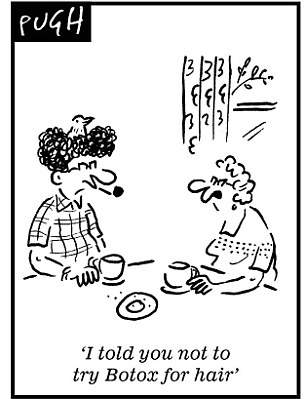 Fish protein found in the diet of Greenland’s Inuits could help women battling hair loss.
A study has shown that those taking the supplement in a tablet described as ‘Botox for hair’ could reduce thinning within weeks.
Researchers tracked 72 women suffering from hair loss due to stress, poor diets or hormonal reasons. Some women took the protein tablets, while others took placebo.
Those taking the tablets from hair-care firm Viviscal – containing the protein AminoMar C – every day saw their hair loss reduced by a fifth after three months. There was a 7 per cent increase in hair thickness after six months.
Viviscal’s dermatologists have hailed its products as ‘Botox for hair’. They claim that the tablets reverse the process endured by many women going through the menopause, who see their youthful, thick follicles become wispy and brittle.
The brand, which also has products for men, is a favourite with celebrities including actress Kate Hudson, who suffered hair loss after pregnancy, and Sex And The City actress Cynthia Nixon, who shaved her head for a Broadway play. It has also been recommended by Lady Gaga’s stylist.
Professor Glynis Ablon of the University of California, who led the research commissioned by Viviscal, said: ‘In the hair-loss industry, where it is estimated almost 99 per cent of products are completely ineffective, this research is an exciting development.
‘The results from this trial show a statistically significant improvement in the Viviscal group and may represent the first robust clinical trial to see hair growth in women associated with the use of a nutritional supplement.’
Details of the study were revealed at the World Congress for Hair Research in Edinburgh. They will be published in the Journal of Investigative Dermatology this month.
AminoMar C was discovered by a Scandinavian dermatologist who was studying the Inuit population of Greenland. He observed their thick, healthy hair, which  he linked to the protein now used by Viviscal. Its tablets cost £49.95 for one month’s supply.
Nutritionist Angela Dowden said: ‘Healthy hair comes from a balanced diet that is nutrient-dense.
‘Because hair is mostly protein, this is an important area of your diet, and other ingredients, such as essential fatty acids, iron, silica, biotin and zinc, are important for hair growth and preventing brittle, unhealthy-looking hair.
‘The perfect diet is difficult to achieve, so supplementing with Viviscal – which combines these ingredients with AminoMar C – is useful.’