While the Greek economy remains under the proverbial knife of the Troika, it appears the wealthy in the island nation are transforming themselves at record rates. Der Spiegel reports that not only does Greece have the second highest rate of cosmetic surgery per capita in the world but thanks to a slumping economy, surgeons have cut prices by up to 40% and rich Greeks are tucking, lifting, and firming at record rates... 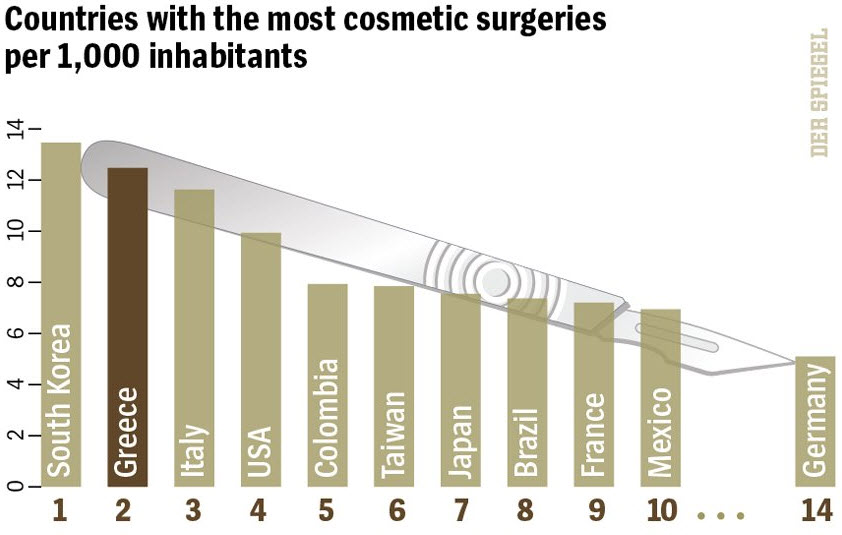 The economic crisis has forced thousands in Greece to rely on volunteers for even basic health care services.

Meanwhile, wealthier Greeks are having more facelifts and breast implants than anywhere in the world.

Every year, the International Society of Aesthetic Plastic Surgery (ISAPS) performs a survey of the number of plastic surgery procedures performed worldwide. When the numbers are compared to a country's population, the results are surprising for Greece. In 2011, 142,394 procedures were performed in the country, with its population of about 11 million. That means that, on average, one in 79 Greeks has had procedures such as liposuction, eyelid corrections and Botox injections performed on them. Worldwide, the Greeks rank only second to the South Koreans in terms of the number of cosmetic procedures performed per 1,000 inhabitants (see graphic). In Germany, with a population of about 81 million, there were 415,448 procedures in 2011, or one in about 200.

2011 was the year of the economic crisis, and yet Greece rose even higher in the international ranking. Looking good still seems to be important to the Greeks. But why now?

The country has cut costs drastically in other areas of medicine.

Many hospitals have reduced their emergency room hours to only four days a week, resulting in longer waits for patients. Owing to cuts in government payments to doctors, many now expect patients to pay their bills in cash. Likewise, experts estimate that about 35 percent of Greeks have no health insurance. So how is it possible that the beauty business is still in full swing?

"Maybe they're earning less money, but they are working. We adjust ourselves to the market." His prices have declined by 40 percent in the last two years, mostly because his costs have come down. Athanasiou performs his operations in private clinics. In the past, he says, a hospital charged €2,000 for the use of an operating room, but now the price has dropped to €700. An anesthesiologist, he adds, now charges €150 instead of the €400 he or she used to charge.

Athanasiou now charges between €2,500 and €5,000 for a nose correction or a breast augmentation. "That's a good price," he says.

In one respect, Vichas shares the sentiments of cosmetic surgeon Athanasiou. "I also see an opportunity in the crisis,"