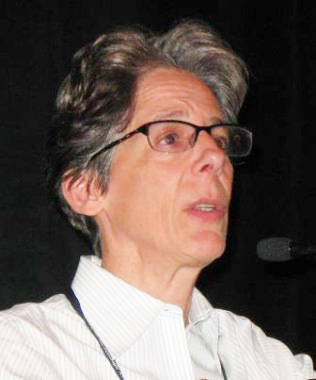 Most dermatologists are pretty good at diagnosing ulcers that are caused by single etiologies. What Dr. Mauro sees more commonly in her busy referral practice, however, are wounds that won’t heal because of a combination of causes – often venous insufficiency plus something else, she said at the annual meeting of the Pacific Dermatologic Association.
“That can make the diagnosis a little more confusing,” said Dr. Mauro, professor of Dermatology at the University of California, San Francisco and Chief of the Dermatology Service at the San Francisco Veterans Affairs Medical Center.

Ulcer types
The most common skin ulcer in the United States is due to venous insufficiency. These patients tend to be spread among dermatologists, vascular surgeons, and podiatrists and “are not well served by being scattered among different disciplines,” she said.
Arterial ulcers make up 6%-10% of skin ulcers in the medical literature, and the incidence of diabetic ulcers is increasing, she added. Pressure ulcers are becoming more common as the population ages.
Morphology and the location of ulcers usually can distinguish the different types, but don’t forget to check the patient’s pulses and sensations, Dr. Mauro said. If you can feel pedal pulses, the patient is very likely to have a normal ankle brachial index (greater than 0.8). “It’s an easy thing to do and very helpful,” she said. Also, break a Q-tip cotton swab in half and poke the patient with the sharp end. “You’d be surprised at the number of people who have altered sensation” that’s contributing to the ulceration.
A common “combination” that gets missed is a nonmelanoma skin cancer and an ulcer at that site from venous insufficiency. Consider taking biopsies of nonhealing ulcers to look for skin cancer, she said. Long-standing ulcers can develop squamous cell carcinoma within them. A basal cell carcinoma can look like a healing ulcer, but not heal.
Bullous diseases also can be hidden in ulcers, particularly in the elderly. “There seems to be a two-hit thing with venous insufficiency where you have a little bit of blistering disease and you have a lot of hydrostatic pressure, and people will get their bullae on their legs long before they get it anyplace else,” Dr. Mauro said. “You put compression on and they come back next week and now they have intact bullae. Think about that as another cause.”
Less common ulcerative problems that can be confusing include pyoderma gangrenosum (which may be half as common as people think, studies suggest), an underlying vasculitis, or mycobacterial infections. If you see a nonhealing hyperkeratotic lesion, consider an atypical mycobacterial infection. In Dr. Mauro’s region, these usually are in patients who went mountain biking and inoculated themselves through an ankle scratch or in patients exposed to the organism through infected water during a pedicure.

Systemic conditions
Wound healing can be inhibited by things that doctors do, and by things that patients do.
Taking antimetabolite medications (such as hydroxyurea or methotrexate), prednisone, or nonsteroidal anti-inflammatory drugs can impair wound healing, as does smoking. Radiation to the site also inhibits healing. Think twice before irradiating a basal cell carcinoma on the leg of a patient with venous insufficiency. “It’s much better to either try some topical medication or just bite the bullet, do surgery, and put the Unna boot on after the surgery, because if you irradiate [the basal cell carcinoma] and it ulcerates, then it’s really hard to heal,” she said.
Coexisting cancer or arterial disease can inhibit wound healing. If you check pulses and can’t feel them, send the patient for an ankle brachial index to determine if there’s arterial disease, in which case the patient should see a vascular surgeon, she said.
When you’re taking patients’ histories, ask what they’re eating so you can assess whether they’re getting enough protein, zinc, and vitamin C. “You’d be surprised at the number of nutritional deficiencies that we see” in patients with nonhealing wounds. Her clinic picks up a zinc deficiency three to four times per year and a protein deficiency approximately twice a year. “All of these are things that you need to make collagen and granulation tissue,” she explained. Supplementation with Ensure can provide these nutrients, but a less-expensive option is Carnation Breakfast Essentials, at about one-fifth the cost, she added.

Tailor therapy appropriately
Dressings can make wounds worse. Most commonly, putting a hydrocolloid dressing (such as DuoDERM) on an ulcer that has a lot of drainage will macerate and enlarge the wound. Putting stiff foams or self-adherent wraps such as Coban on wounds with a lot of edema can create secondary ulcers. And avoid compression on the legs of people with arterial insufficiency, Dr. Mauro said.
Artifactual ulcers from patients scratching or picking at wounds are increasing, she said. These patients usually will not report that they’re messing with the wound, but your level of suspicion should increase if the ulcer is above the knee. Hydrocolloid dressings work pretty well for this problem. Consider sending some of these patients to an expert in the growing field of medication therapy for dysesthesia.
Ask patients about home remedies, because they will put all kinds of things on wounds to try and help them heal. Neomycin can cause contact dermatitis. Patients may apply full-strength hydrogen peroxide, thinking that they need a disinfectant, which tends to damage the epithelium and can impair wound healing. If they insist on using hydrogen peroxide, recommend a half-strength solution.
For patients with venous insufficiency, the hydrostatic pressure from sitting can be nearly as bad as from standing. Ask patients with nonhealing wounds what they do at home and at work. If they’re sitting much of that time, recommend products to alleviate the pressure. Dr. Mauro said she has virtually become a saleswoman for La-Z-Boy furniture during her medical career because La-Z-Boy products allow patients to eat, work at computers, and function in positions with less hydrostatic pressure.

When to refer
Consider referring patients with chronic wounds that have not lost at least 50% of their width and height within 6 weeks. When a wound has been present long enough, the physiology shifts from acute to chronic. “It’s as if the body decides that it’s tired of trying to heal it and its new equilibrium is just going to be, ‘I have a wound,’ ” she said.
If you want to try treating chronic wounds, applying Promogran Prisma matrix wound dressing in those without good granulation tissue may stimulate granulation tissue, she said.
Debriding an ulcer is “kind of a poor man’s way of getting platelet-derived growth factor,” she added. Dr. Mauro applies a compounded 30% lidocaine (“but you can use any topical lidocaine”), leaves it on for 20-25 minutes, and debrides using a curette, which is much more precise than a scalpel. “What you’re trying to do is ‘reboot the computer’ and trick the ulcer into thinking it’s an acute ulcer rather than a chronic one,” she said.
Dr. Mauro said she refers patients with arterial insufficiency to vascular surgeons. She sends patients with diabetes to podiatrists, preferably before they develop ulcers. The podiatrist can regularly trim nails for patients with poor sight and loss of sensation who may cut themselves, and can design footwear to avoid pressure that could cause an ulcer. “That will keep you out of trouble” with diabetic patients, she said.

Dr. Mauro has been a consultant for Unilever, but not in a wound-healing capacity.