Low HDL Cholesterol a Problem, Even When LDL Is Controlled 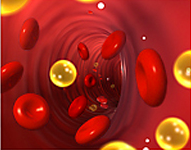 NEW YORK (Reuters Health) - Even when levels of low-density lipoprotein (LDL) cholesterol are well-controlled, patients who lack high-density lipoprotein (HDL) cholesterol are still at risk for cardiovascular events, a post-hoc analysis of trial data suggests.
"What these data tell us is that even if you obtain an optimal LDL level of less than 70 with statins, that you're not home free, that's not a warranty that you're not going to have an event," said Dr. William Boden, the chief of medicine at the Samuel S. Stratton Albany VA Medical Center and the study's senior author.
The conclusions are drawn from a retrospective analysis of data from the COURAGE trial, which randomized patients with significant coronary artery disease and myocardial ischemia to either percutaneous coronary intervention and optimal medical therapy or optimal medical therapy alone.
The new analysis included 2,193 patients with stable ischemic heart disease who were followed for an average of four years. All were on optimal medical therapy, including low-dose aspirin, anti-ischemic therapy (long-acting metoprolol, amlodipine and isosorbide mononitrate, alone or in combination); and lisinopril or losartan for hypertension.
The primary endpoint was the composite rate of death or heart attack.
As reported online August 21 in the Journal of the American College of Cardiology, patients were stratified into quartiles based on HDL cholesterol levels and then hazard ratios were calculated for each of the groups, following adjustment for age, body mass index (BMI), and other cardiovascular risk factors.
Those in the highest HDL cholesterol quartile had a 33% reduction in the risk of death or heart attack compared with those in the lowest quartile (HR 0.67; p=0.02). Across all groups, the risk was significantly lower among those in the higher quartiles (p=0.02).
The investigators, led by Dr. Subroto Acharjee of Einstein Medical Center in Philadelphia, then analyzed the interaction between LDL and HDL cholesterol levels by performing a regression analysis using three pre-specified levels of LDL cholesterol: <70 mg/dL; 70 to 100 mg/dL: and >100 mg/dL.
In this second analysis, among patients in the same LDL cholesterol group, those with a higher HDL cholesterol level "experienced a greater protective effect," the investigators reported.
Overall, the effect of HDL cholesterol on death or heart attack functioned independently of LDL cholesterol levels, the authors say.
The results are consistent with previous trials. "We know that HDL cholesterol on treatment is a predictor of events," said Dr. Krausik Ray, a professor of cardiovascular disease prevention at St. George's University of London, in an email. "Even at low LDL cholesterol this is true, as seen here."
The primary question moving forward is how to eliminate this remaining risk.
"How to address this residual risk remains a critical unanswered question," said Dr. Emil deGoma, the medical director of the Preventive Cardiovascular Program for the University of Pennsylvania Health System, in an email. "It is not clear that HDL-directed therapy would be the optimal, or only, approach to lowering cardiovascular risk in patients with low HDL-cholesterol levels."
In the absence of drugs that can directly target HDL cholesterol levels, Dr. Ray said, the best approach for the time being is to "target lifestyle, blood pressure (and) LDL cholesterol lowering more aggressively."