OBJECTIVE
To compare time to acute myocardial infarction (AMI), stroke, or death in a cohort of metformin initiators who added insulin or a sulfonylurea.

DESIGN, SETTING, AND PARTICIPANTS
Retrospective cohort constructed with national Veterans Health Administration, Medicare, and National Death Index databases. The study population comprised veterans initially treated with metformin from 2001 through 2008 who subsequently added either insulin or sulfonylurea. Propensity score matching on characteristics was performed, matching each participant who added insulin to 5 who added a sulfonylurea. Patients were followed through September 2011 for primary analyses or September 2009 for cause-of-death analyses.

CONCLUSIONS AND RELEVANCE
Among patients with diabetes who were receiving metformin, the addition of insulin vs a sulfonylurea was associated with an increased risk of a composite of nonfatal cardiovascular outcomes and all-cause mortality. These findings require further investigation to understand risks associated with insulin use in these patients.

Numbers or Outcomes?
The dichotomy between managing numbers and the outcomes achieved in diabetes treatment is described in two articles published in JAMA. Willia et al1 provided a nice review of insulin therapy and show that insulin is the most efficient way to lower HgbA1c. Roumie et al2 showed that adding insulin to metformin, when compared with insulin plus sulfonylurea, was associated with a 1.3-fold risk for cardiovascular events or all-cause mortality and a 1.85-fold risk for death from cancer.
This study brings back memories of the ACCORD study, which showed that intensive therapy that included more insulin (77% of patients in intensive group vs 55% in standard group) was associated with a 22% increased risk for death from any cause.3
We cannot live without insulin, but too much (insulin resistance) can cause harm. Insulin increases inflammation, weight gain, and risk for hypoglycemic events. Insulin resistance is also associated with hypertension, atherosclerosis, malignancy, and a hypercoagulable state.
This is a reminder to intensify therapy that can preserve islet beta-cell function so we do not have to add as many medicines to treat organ failure (Figure). The more we can shift focus to “A” interventions, hopefully the less medicine (“B” interventions) is needed. 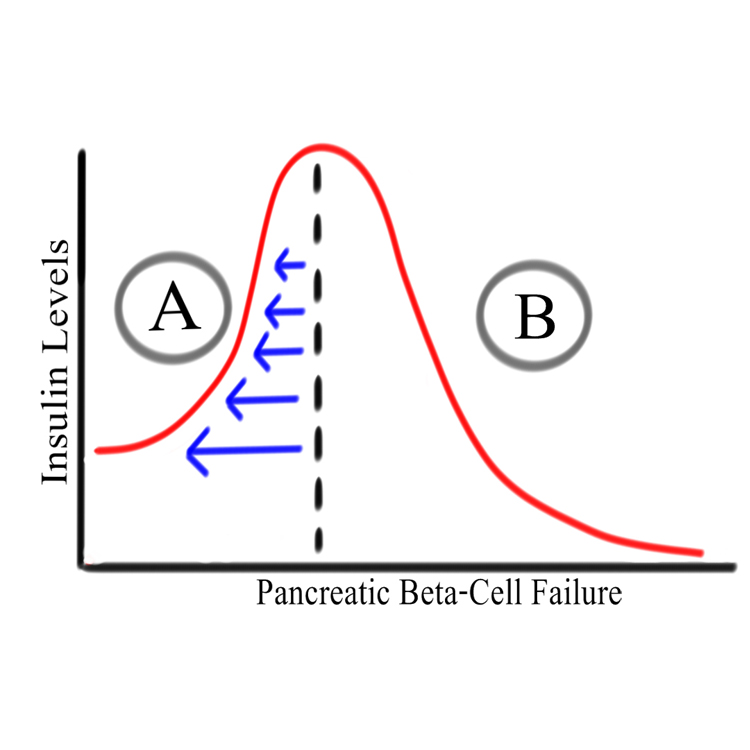 Remember the results of the Diabetes Preventions Trial. Lifestyle habits (average of 8 lbs of weight loss, exercise, and improved nutrition) reduced the progression to diabetes by 58% compared with metformin at 28%.4 The PREDIMED study showed that a Mediterranean diet was associated with a 52% decreased incidence of diabetes in those at high risk.5
The most important therapies to preserve pancreatic function should be familiar:

“B” Interventions:
We do not want to increase insulin when there is resistance with high levels (see A in the figure). Once the ongoing disease causes beta-cell failure, the time has come to add more medicine (see B in the figure).

“A” interventions are most powerful in improving outcomes and reversing the disease process, while “B” interventions are needed to support organ failure. These studies show that, although insulin improves HgbA1c numbers, it does not always correlate with improved outcomes.