Lycopene May Reduce the Risk of Colorectal Cancer 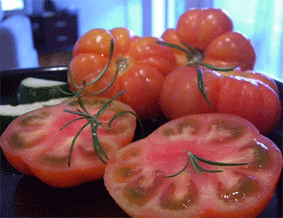 Many health organizations recommend eating more produce for colorectal cancer protection, but the mechanism for its disease-fighting ability is less well understood. Fruits and vegetables are rich in fiber and antioxidants – compounds that protect cells – and scientists have suspected that both play a role. Researchers from Stuttgart, Germany looked the relationship of three antioxidants – lycopene, beta-carotene, and alpha-tocopherol – and their association with colorectal adenomas, growths that are possibly precancerous.
The 165 volunteers were part of a larger study of lifestyle habits and colorectal adenomas. All had a recent colonoscopy to evaluate hidden blood in the stool, but were otherwise healthy, with no prior personal or family history of colorectal cancer or polyps. Polyps discovered during the colonoscopy exam were removed and classified as adenomatous – growths that might turn cancerous if not removed – or hyperplastic, which tend to be smaller and are thought to be unlikely to ever develop into cancer. A nutritionist questioned the volunteers about their diets, including consumption of alcoholic beverages, and other habits. Blood samples were measured for levels of lycopene, beta-carotene, and alpha-tocopherol. The investigators looked for relationships between blood levels of the antioxidants and colorectal growths.
Low blood levels of lycopene and smoking were both associated with an increased risk for adenomas, after other factors were ruled out that can influence colorectal cancer risk, such as age, body fat, and gender. There was no relationship between the presence of adenomas and levels of beta-carotene and alpha-tocopherol.
Lycopene is concentrated in tomatoes and tomato products. The researchers concluded that lycopene is in part responsible for the protective effect high tomato intake has against the risk of colorectal adenomas. Other studies have shown that beta-carotene and alpha-tocopherol have a healthful influence too, but this study does not substantiate that. Lycopene appears to protect cells from the damage caused by free radicals, which are by-products from the body’s oxygen use and also a result of exposure to cigarette smoke and excessive sunlight.
Besides tomatoes and tomato products, other lycopene-rich foods include watermelon, pink grapefruit, pink guava, and papaya. Include these foods in your daily mix of fruits and vegetables. The American Cancer Society recommends at least five servings of produce a day. Another lifestyle choice, which consistently proves beneficial – as in this study – is not to smoke.