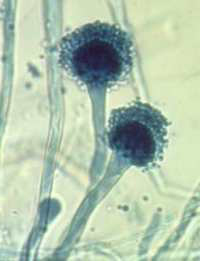 Isavuconazonium sulfate, an azole antifungal drug, has been approved to treat invasive aspergillosis and invasive mucormycosis, “rare but serious infections,” the Food and Drug Administration announced on March 6.
Available in both intravenous and capsule formulations, the drug will be marketed as Cresemba by Astellas Pharma US.
Approval for the aspergillosis indication was based on a study of 516 patients randomized to treatment with isavuconazonium or voriconazole, which is approved for treating invasive aspergillosis and is the standard of care; approval of the mucormycosis indication was based on a single-arm study of 37 patients, which compared treatment results with “the natural disease progression associated with untreated mucormycosis,” according to the FDA statement announcing the approval.
“Both studies showed Cresemba was safe and effective in treating these serious fungal infections,” which most often affect immunocompromised patients, the statement said.
At a meeting in January, the FDA’s Anti-Infective Drugs Advisory Committee recommended approval of both indications, although they were more ambivalent about the mucormycosis indication because of the small amount of data in those patients. One of the manufacturer’s postmarketing commitments is to establish a registry “to collect and analyze clinical efficacy-related outcome data on patients treated with isavuconazonium sulfate who have invasive mucormycosis or infection with non–fumigatus aspergillus species,” according to the FDA’s approval letter.The most common side effects associated with isavuconazonium include nausea, vomiting, diarrhea, headache, elevated liver chemistry tests, hypokalemia, constipation, dyspnea, cough, peripheral edema and back pain. Serious adverse events include liver problems, infusion reactions and severe allergic and skin reactions. The IV formulation comes in a powder formulation that is reconstituted for intravenous administration, and when administered intravenously, an in-line filter should be used because of the possibility that insoluble particulate may be formed after reconstitution, according to the prescribing information.