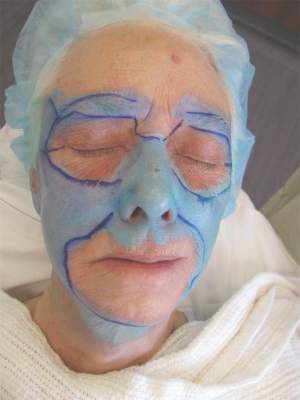 NEW ORLEANS – When deciding whether to laser or peel, safety is enhanced and postoperative results are more favorable when five factors are considered, according to Dr. Suzan Obagi of the Cosmetic Surgery and Skin Health Center at University of Pittsburgh Medical Center.
“When I look at a patient and I am deciding on a skin resurfacing modality, I go through a checklist in my head to evaluate their skin color, thickness, and anatomy; the depth of their skin problem; and the number of treatments the patient will be willing to go through,” she noted in a presentation at the annual meeting of the American Academy of Cosmetic Surgery.
Consider every factor and to inform patients of the risks and benefits associated with each skin resurfacing modality, she said.
“Peels and lasers don’t work the same way, and comparing them is like comparing apples and oranges,” she noted.
In general, lighter skin responds well to a wide variety of peels and laser treatments, and fares particularly well when treated with lasers, said Dr. Obagi. However, patients with darker skin present a special challenge because they are more likely to present with a number of skin problems such as melasma, lentigines, ephelides, post-inflammatory hyperpigmentation (PIH), post-inflammatory erythema (PIE), acne scars, and dermatosis papulosa nigra (DPN). These patients often require a combination of modalities to address their concerns.
The depth of the skin problem should be carefully considered, as different modalities to treat specific indications are targeted to various depths, Dr. Obagi noted. Photodamage is a superficial condition that she typically treats with peels, while superficial scars and rhytids, can be treated with a combination of lasers and peels. Deep scars and rhytids that reside deeper in the skin should be treated with lasers.
“You can try to reach some of these deeper problems with peels and superficial laser peels, but you may end up in trouble from pushing a modality deeper than you can control it,” stressed Dr. Obagi. “When I see deep acne scars, I immediately know to use a laser; no chemical peel is going to address that,” she added.
Thin skin is easier to treat with peels, and lasers are safer to use on thick skin, she said. Thicker skin can be treated with peels, but requires the application of more solution. “It’s harder to get results when doing a peel on thick skin, so I prefer to do laser resurfacing,” said Dr. Obagi. “On thin skin, I’d rather do a chemical peel and save the laser for the areas that really need it.”
When evaluating the anatomic area of the skin to be treated, remember that lasers cannot be used on certain parts of the face, noted Dr. Obagi. The areas around the hairline, eyes, ears, and neck pose the most risk when using lasers. “If you laser around the eyebrows, you’ll burn them off; if you laser the neck, you sometimes learn the hard way that the neck isn’t very forgiving,” she said.
Finally, consider the number of treatments needed to achieve the desired result in conjunction with the number of treatments a patient is willing to go through, Dr. Obagi said. Fractionated lasers, by definition, do not treat 100% of the skin in one session; they cover 20%-40% of the skin surface, and multiple treatments are recommended for optimal results. Each treatment requires 5-7 days of recovery time, and pain can be managed with oral and local anesthesia.
“When using lasers, I prefer to treat more aggressively with fewer sessions,” she added.
Conversely, medium-depth peels are suitable for all skin types and anatomic areas and cover 100% of the skin being treated. Optimal results can usually be achieved in one session followed by 7 days of recovery time. Pain is managed with oral sedation, and the whole face can be treated in 20-30 minutes, noted Dr. Obagi.
Additionally, medical conditions such as autoimmune diseases, and social habits such as smoking should be considered when choosing a treatment, as these conditions can affect healing time.
Dr. Obagi reported serving on the scientific advisory board for Valeant Pharmaceuticals.