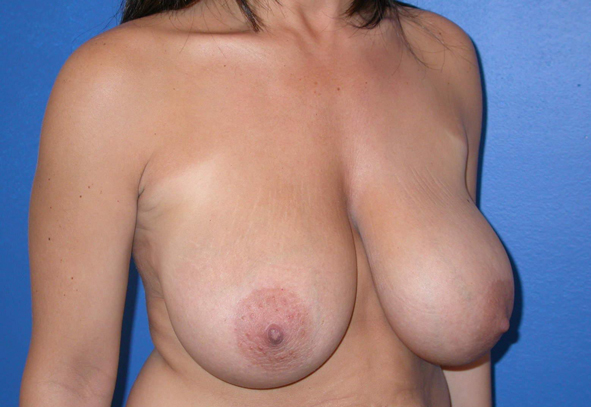 Orlando – As dermatologists do their routine skin checks, they also should pay attention to the breast and the nipple, Dr. David T. Harvey advised in a presentation at the annual meeting of the Florida Society of Dermatologic Surgeons.
Although nipple and areolar tumors are relatively rare, “we have an important role in their evaluation and a wonderful opportunity to impact breast cancer awareness and detection,” said Dr. Harvey, a dermatologist and cosmetic surgeon in Newnan, Ga.
Literature on nipple tumors is limited, but in general, benign breast lesions are much more frequent than the malignant ones. The differential diagnosis can be confusing, “so you don’t want to over or underreact,” while still giving patients the best advice, Dr. Harvey said.

Begin with history
The first step in assessing a lesion on the nipple or areola is to take a thorough history and physical.
The questions to ask include: Is there a discharge? Is there atrophy? Is there a cutaneous erosion? Has the lesion been changing in size? Is the patient pregnant? Is the lesion painful? Perform a visual inspection of the breast and areolar skin, looking for unusual lumps and masses. If the patient will allow, cursory palpation of the breast tissue is helpful.
Ask patients if they have a record of their latest mammograms or MRI. “Get on the phone if you’re not sure. Call a trusted breast specialist, general plastic surgeon, or a surgical oncologist,” he said.
If there’s a lesion that’s erosive and has been there for 6 or 7 months, get a full-thickness incisional biopsy. It also is important to document the presence or absence of axillary lymphadenopathy.
The nipple discharge can be cultured, although most times cultures don’t yield specific data.
And finally, educate patients about the benefits and risks of undergoing regular breast cancer screenings.

Benign tumors
Common benign tumors of the nipple and areola include leiomyoma, erosive adenomatosis, angiolipoma, glomus tumor, neurofibromas, cherry angioma, tags, and epidermal nevus.
Hyperkeratosis around the nipple is another benign condition and can be caused by lack of hygiene. “In these cases, education about how to clean and care for this area is helpful,” Dr. Harvey said.
Erosive adenoma of the nipple is another rare condition. It is usually 0.5-1.5 cm in diameter and arises from apocrine sweat ducts of the nipple’s epithelium. Its clinical symptoms include serosanguinous discharge, bleeding, crusting, erythema, swelling, ulceration, and, in some cases, recurrence because of incomplete removal. This tumor usually occurs in middle-aged women and sometimes is associated with fibrocystic breast disease, breast cancer, and supernumerary nipple. It also can be bilateral. The best treatment is Mohs micrographic surgery.

Malignant tumors
Malignant tumors of the breast and nipple usually present as a lump, hard knot, or thickening inside the breast or underarm area. There’s usually swelling, warmth, redness, or skin hyperpigmentation, in addition to change in the size or shape of the breast.
Other clinical features include dimpling and puckering of the skin and an itchy, scaling sore or rash on the nipple, said Dr. Harvey.
Look for the “pulling in” of the nipple or other parts of the breast, nipple discharge, and discomfort in the breast that doesn’t resolve, he said.Examples of malignant tumors of the nipple include intraductal breast carcinoma, well-differentiated adenocarcinoma, melanoma, leiomyosarcoma, and squamous cell carcinoma.
Paget’s disease (PD), another breast malignancy, is rare and can mimic eczema or dermatitis. In PD, the nipple may be flattened or eroded. This condition often presents with a discharge and affects older women.
Between 50% and 70% of patients with biopsy-proven mammary PD show positive findings on mammography. The majority of patients who have biopsy-proven Paget’s disease of the nipple as the only physical finding have an underlying deeper breast carcinoma, said Dr. Harvey.
Negative preoperative mammography findings do not reliably exclude an underlying carcinoma. “MRI of the involved breast is a more sensitive way to detect occult PD and is an important tool to help with treatment planning for patients with PD,” he said.
The treatment is radical or modified mastectomy, and lymph node clearance for mammary PD with a palpable mass and underlying invasive breast carcinoma. Estrogen receptor antagonists also can be used in selected cases.

In summary, Dr. Harvey said that it is vital to biopsy a nipple or areolar lesion that is not responding to traditional therapies.
And don’t limit your examination to women
Dr. Christopher Moeller of Wichita, Kan., said that he had diagnosed three men with breast cancer, none of whom where aware of it. One patient had a retracted nipple, another had one breast larger than the other, and he found another lump through palpation.
“Always ask patients,” about their breast health and examine the area, he advised.