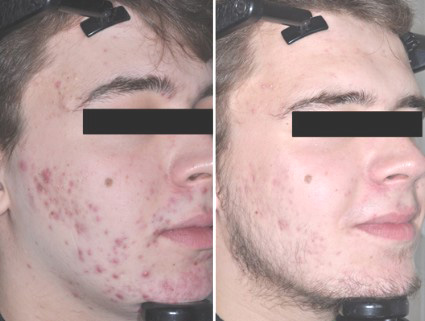 PHOENIX – Application of gold-coated microparticles to the skin may enhance laser photothermolysis of sebaceous glands to treat acne, according to three small, preliminary studies.
Inadequate contrast in sebaceous glands has limited the effectiveness of selective photothermolysis to treat acne. Specially engineered 0.150-mcm microparticles of inert gold coating a silica core were designed for surface plasmon resonance at near-infrared wavelengths to optimize contrast and high absorption of light in the sebaceous glands during laser treatment.
In a randomized, controlled crossover study, 48 patients with acne vulgaris received either immediate or delayed treatment for 12 weeks, after which the delayed-treatment group also began receiving the treatment. Immediate treatment included three treatments at 2-week intervals. The treatment consisted of a microparticle suspension gently massaged into facial skin for about 8 minutes, superficial skin cleansing, and pulsed irradiation with two passes of an 800-nm laser. Patients in the delayed-treatment group used an over-the-counter face wash (2% salicylic acid) twice daily.
The mean number of inflammatory lesions decreased by 34% at 12 weeks after treatment started, compared with a 16% reduction in the control group, a statistically significant difference, Dilip Paithankar, Ph.D., reported at the annual meeting of the American Society for Laser Medicine and Surgery.
At 28 weeks after the crossover to treatment for all subjects (40 weeks after the start of the study), the mean number of inflammatory lesions decreased by 61%, reported Dr. Paithankar, chief technology officer at Sebacia, Duluth, Ga., which is developing the gold-coated microparticles treatment.
In another randomized, sham-controlled study, 49 patients with acne vulgaris underwent three laser photothermolysis treatments at weekly intervals using either the gold-coated microparticles or a control vehicle without the particles. Mean inflammatory lesion counts decreased significantly more in the treatment group than in the control group at 8, 12, and 16 weeks of follow-up. In the treatment group, mean inflammatory lesion counts were 44% lower at 8 weeks, 49% lower at 12 weeks, and 53% lower at 16 weeks, compared with baseline. In the control group, mean inflammatory lesion counts were 14% lower, 22% lower, and 31% lower at those time points, respectively, compared with baseline.
Inflammatory lesions were clear or almost clear by the end of the study in 24% in the treatment group and in none of the control patients.
Data from a separate histologic study suggest that using ultrasound to assist delivery of the gold-coated microparticles may improve selective destruction from laser treatment, Dr. Girish Munavalli reported at the meeting. Ultrasound has been used in other settings to enhance delivery of small molecules through the stratum corneum.
The study used an ultrasound horn vibrating in a microparticle suspension placed in an enclosure above preauricular skin in 37 subjects, followed by 800-nm laser treatment. Biopsies taken within 15 minutes showed localized thermal injury to infundibuli and sebaceous glands with no collateral damage to surrounding tissue or to the epidermis, reported Dr. Munavalli, a dermatologist in group practice in Charlotte, N.C. The extent of thermal damage correlated with the duration of the ultrasound.
The level of damage could be expected to improve acne, but that needs confirmation in clinical trials, he said.
In each of the studies, the treatments were well tolerated, with minimal side effects including mild to moderate pain (using no anesthetic) and short-lived erythema and edema.