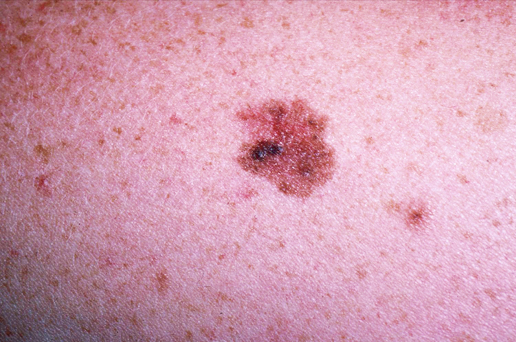 Melanoma risk increased by 80% among women who had five or more severe sunburns as teenagers, based on a review of data from more than 100,000 white women.
The findings were published online May 29 in Cancer Epidemiology, Biomarkers and Prevention, a journal of the American Association for Cancer Research.
“We investigated the relationship between a number of potential risk factors, including chronic sun exposure over long durations in adulthood and sun exposure in early life, and risk of different types of skin cancer,” wrote Dr. Shaowei Wu of Brigham and Women’s Hospital, Boston, and colleagues.
Diagnoses of 6,955 basal cell carcinomas (BCCs), 880 squamous cell carcinomas (SCCs), and 779 melanomas were identified during 2.05 million person-years of follow-up. The relative risk of skin cancer was 68% higher for both BCC and SCC, and 80% higher for melanoma in women who reported five or more blistering sunburns between ages 15 and 25 years, compared with those who reported no such sunburns (Cancer Epidemiol. Biomarkers Prev. 2014;23:1080-9).
The study included 101,916 nurses participating in the Nurses’ Health Study II. The women enrolled between the ages of 25 and 42 years, and were followed for 20 years between 1989 and 2009. The eligible participants had no baseline history of any cancer and were diagnosed with incident BCC, SCC, or melanoma between baseline and the last follow-up.
Cumulative ultraviolet radiation exposure in adulthood, measured over long durations using a composite estimate called UV flux, also was associated with an increased risk of BCC and SCC, but not with melanoma. This suggests that “melanoma may have a more complicated relationship with sun exposure than SCC and BCC,” the researchers said.
The study was limited by the approximate estimates of UV radiation exposure, incomplete information about personal behaviors such as sunscreen use, and the fact that BCC cases were not independently validated as SCC and melanoma. However, the findings “support heterogenous associations between sun exposure, other potential risk factors, and risk of different types of skin cancer, and thus may have potential implications for the prevention of skin cancers,” the researchers noted.
Also, “our participants consisted entirely of white women, and thus the generalizability of the results to men and other ethnicities may be limited,” they said.