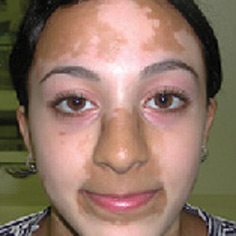 Background: Vitiligo is a common disorder of depigmentation that has been associated with other autoimmune diseases. No recent large-scale data exist on the rates of comorbidities associated with vitiligo from the United States population.

Objectives: To identify the prevalence of comorbidities as well as associated laboratory abnormalities in vitiligo patients.

Methods: All medical records dating from January 1, 2000 to June 21, 2011 within the Research Patient Data Repository were evaluated retrospectively using a novel artificial intelligence-based computer program. A total of 3,280 patients carrying the diagnosis of vitiligo were identified using ICD-9 code 709.01. We randomly selected 300 patients and validated the diagnosis by manually reviewing their medical records. These results were used to create a model that was then applied to the larger set yielding 2,441 true vitiligo patients. 1,657 (68%) were diagnosed by dermatologists and 784 (32%) by non-dermatologists. We identified the prevalence of other comorbid autoimmune conditions by searching problem lists of vitiligo patients and collected laboratory data from the first available data point in the system for each patient.

Results: Women were more frequently represented (57.6%) than men (42.4%). The majority of vitiligo patients were White/Caucasian (56.9%), followed by Hispanic/Latino (19.4%). 565 (23%) had one of the following comorbidities: 287 thyroid-related, 186 psoriasis, 72 rheumatoid arthritis, 59 alopecia areata, 55 inflammatory bowel disease, 53 systemic lupus and 20 type I diabetes mellitus. 41% had elevated anti-nuclear antibody levels. Almost half of the patients tested had elevated thyroid peroxidase antibodies. Over 50% of the patients tested had low or insufficient levels of 25-OH vitamin D.